“I’m not visiting another imperial palace or baroque church until we’ve seen the Zaha Hadid funicular,” I say.

Dr K looks at me with a face betraying absolute incomprehension, obviously concerned that I may have passed the point of no return on the road to cultural redemption.

We’re just coming out of the Hofburg, in central Innsbruck, the palace from which Marie Antoinette’s mother, Empress Maria Theresa, ruled Austria for 40 years.

Now Dr K is casually suggesting that we go on to Schloss Ambras, on the other side of town, when all we really want is a nice mélange and a slice of chocolate torte.

To be fair to the boy, Schloss Ambras is a magnificent place, but somebody has to slow down this runaway Baroque rollercoaster.

Plus, the weather has been miserable. Drizzle all day since we left Feldkirch this morning. The only ten minutes without rain was when we drove through the 14km long Arlberg tunnel. What we need is a pick-me-up, not another hour of schlepping around a museum.

Diplomatic talks ensue. We eventually agree that, as the weather is due to improve tomorrow, we should keep the Zaha Hadid outing until the morning and then go to Schloss Ambras.

In the meantime, and as a sign of appeasement, we trot on to the Hofkirche, the palace’s church (which is closed tomorrow, which is K’s excuse for coaxing us into a visit).

Impressive in its own way but not exactly beautiful. In the middle of the church stands Maximiliam I’s hubristic cenotaph, topped with an equestrian statue of the man himself. It is surrounded by 28 oversized bronze statues of kings and heroes to whom Maximilian was allegedly related, including Clovis and King Arthur. Much more endearing is its Silver Chapel, whose walls are painted with thousands of angel heads.

From here it’s a short hop to St Jakob, the pinkish-grey cathedral, which is on the Austrian route to Compostella. The organist is rehearsing for tomorrow’s concert, part of the annual Meisterorganisten festival.

We sit down for a while to rest our tired souls. Dr K reckons what we’re listening to is a piece by Duruflé; he’s useful to have around for this kind of thing.

In the evening, the centre of town strangely fills up with groups of American teenagers. Having had schnitzels and chips for lunch, we head to a local restaurant for more typisch fare. A bowl of beef broth with noodles and a hirshragout. No doubt one day vegetables will reappear on the menu.

The next morning, the promised sunshine is there. We head for the Hadid funicular immediately after breakfast. It’s a great ride up to the mid-station at Hungerburg, 300m above the city.

It feels super-modern and functional; driverless carriages chugging through clean concrete tunnels. It reminds me of the Docklands Light Railway when it started in the late 1980s, though less toy train.

And of course the beautiful cetacean shapes of the four Hadid-designed canopies, their pale off-green glass surfaces gleaming in the cool air.

There’s no time to get on to the connecting cable car, which goes up to 2,256m, but just from where we are the views are amazing.

Next is Schloss Ambras, which we could actually see from Hungerburg. Innsbruck is not a big place, so once we’ve packed the car, it’s a ten-minute drive in the sunshine.

Built in the 16th century for Archduke Ferdinand II on the site of a 10th century castle just outside Innsbruck, Ambras has a panoramic view of the city and the mountains in the background. Superb.

The lady at the ticket office tells us to start the visit with the armoury rooms then through to the main collection. We feel we have to oblige.

We end up lingering in the armoury rooms longer than we anticipated, in part because of the wooden ceilings, one painted with constellations and signs of the zodiac and the other with allegories of Greek goods.

The main collection, built as a chamber of arts and curiosities for Ferdinand II, is idiosyncratic but occasionally fun: hundreds of objects carved out of coral or other precious material, which are perhaps an acquired taste but nevertheless technically impressive, a series of busts displayed in niches in the classical Roman style, stuffed lizards, portraits of hairy people, and odd pieces such as what looks like an early version of a Swiss knife.

Across the main courtyard are the stables and the earlier castle. On the first floor, a huge ball room, the Spanish Hall, with portraits of Tyrolean rulers, and delightful renaissance decorated windows.

The remaining two floors, arranged around a sgrafitto courtyard, house the biggest collection of Habsburg portraits – more than 300. Needless to say we scoot through at a brisk pace, even though some of the portraits are signed by Cranach, Titian or Velasquez.

After a nominal stroll in the park, we sit down for some well-earned smoked salmon with cream cheese on potato puffers – a cross between potato pancakes and roesti. And an alcohol-free beer. And a huge ice cream. Let’s be thankful for small mercies. 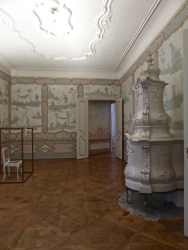 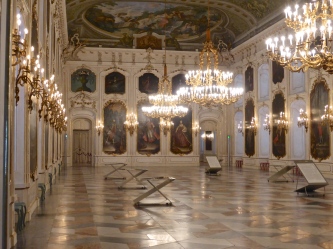 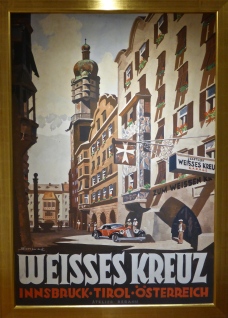 Our hotel, when the street was not pedestrianised

Innsbruck city centre from our hotel window, the next morning 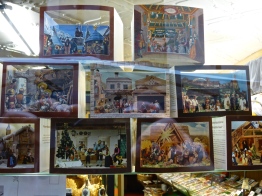 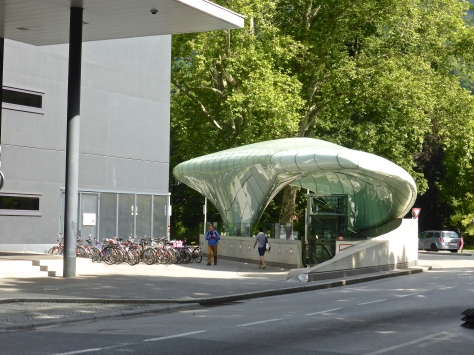 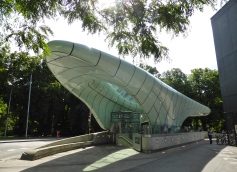 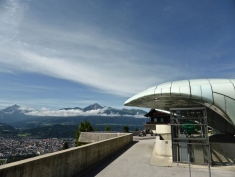 Hungerburg funicular: at the top 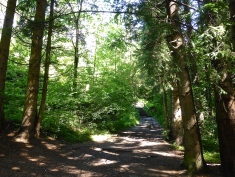 Schloss Ambras: view over the courtyard 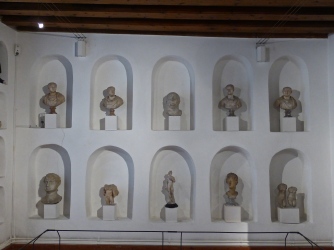 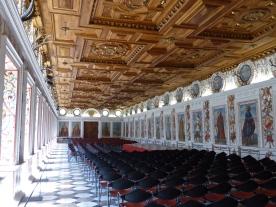 Schloss Ambras: the keyhole to a man’s heart 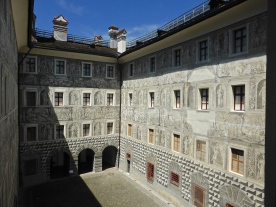