“Would you like to try and find the house?”, I ask Godfather P. “No, these are ghosts from the past,” he replies, looking around to gauge the extent to which the place has changed since his last visit here in 1958.

Feldkirch, an old Vorarlberg market town just over the border from Lichtenstein, is our first Austrian stopover on the way to Vienna, and one that we – P in particular – have been anticipating with heightened curiosity.

Feldkirch has several pretty squares and an impressive 13th century castle towering over the town from the cliff side.

It feels a little southern, with arcaded streets similar to the ones in Bern, and outside cafés, and there is a general air of prosperity.

But it is by no means any more – or less – attractive than many other similar market towns.

The reason we’re here is that P used to holiday there in the 1950s with his extended Austro-Russian family, who would rent a house in the hills for the summer.

What’s more, the town’s founder is a de Montfort, the name of the school in the Shevaroy hills, southern India, that P went to as a boy – although there is apparently no relation.

But you don’t need to go back 60 years to notice the change. On the edge of the old town, at the foot of the cliff, where there used to be old houses and gardens, stands a gigantic, angular 1980s shopping centre.

Alongside, wedged between it and the old electricity substation, a huge building site is giving birth to a new cultural centre. On its own, the main structure that is already out of the ground looks rather elegant; here, it looks like an oversized incongruous mushroom.

And around the corner, the old jesuit college has become the region’s music school.

With the weather not especially conducive to sweet reminiscences, we leave ghosts from the past where they belong.

The next morning, the sun is out again and there are people on the streets. We had a super dinner the night before – where P giggled with the landlady over the local ‘Gruss Gott miteinander’ greeting – and our hotel was positively luxurious for vagabond types like us. But this is how we feel we want to leave things.

Feldkirch is a good place but there’s nothing to keep us there. Next stop: Innsbruck, town of Marie-Antoinette’s mother and Zaha Hadid.

Feldkirch: installation in the church on market square 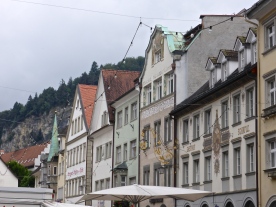 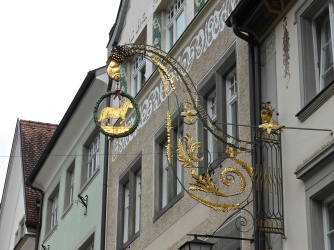 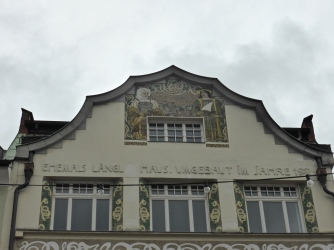 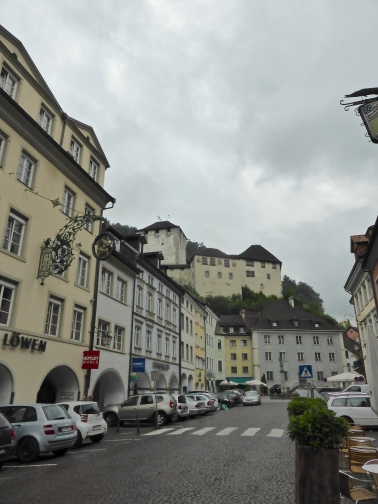 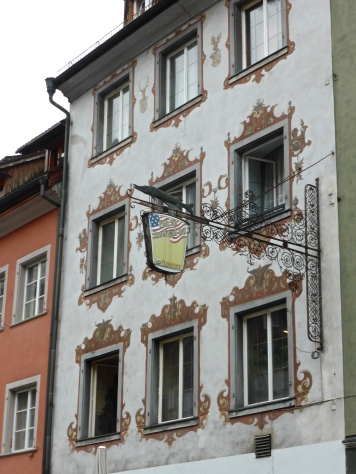 Feldkirch: the American bar – just not the one you’re thinking of 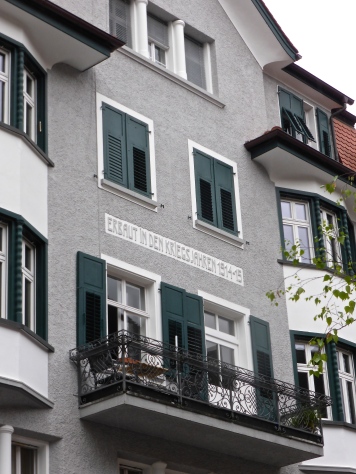 Feldkirch: a change from the traditional Austrian fare

Feldkirch: the show container for the new cultural centre 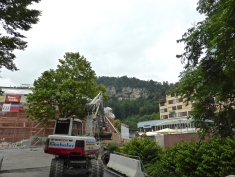 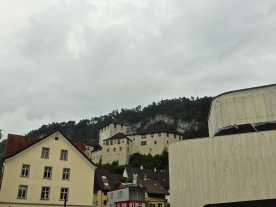 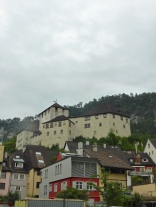 3 thoughts on “Feldkirch: Ghosts from the past”