The drive from Osnabrück to Flensburg starts under showers and grey skies, but by mid-morning the clouds temporarily clear as we veer off the motorway towards Buxtehude. The road goes through the Altes Land, an area developed by Dutch settlers in the 14th century, and it’s a pleasant change from the relentless motorway. It’s fertile land still, with orchards and soft fruits, although Christmas trees appear to be a popular line too.

Buxtehude was a member of the Hanseatic League and it shows in the style of houses. Half-timbered and with Dutch-style gables, they huddle along the canal and picturesque streets of the old town. Some – few, it seems – are entirely original; many appear to have been reconditioned. On the main square sits the modest 1904 stone-and-brick townhall. Further on, the 12th century red-brick church, St Petri Kirche. On its north wall, is a memorial to the dead of the first world war, reminding passers-by that German families too paid a price for the conflict. Inside, the walls are white-washed, except for the arches, which have been left in their natural terracotta colour or painted yellow and green. We linger but the warden pointedly locks one of the doors and follows us around from a distance, a subtle way of letting us know that lunchtime is approaching.

As we drive off northwards past Hamburg, Dr K offers the first of his legendary all-inclusive cultural services. The iPod gets plugged into the car’s system and out comes a prelude by Buxtehude – whose last posting was at the Marienkirche in Lübeck, which is on our schedule for the return journey. It is followed seamlessly by Telemann cantatas as we reach the outskirts of Hamburg. Telemann, Dr K learnedly responds to our uneducated queries, was organist there.

We drive on, under the Elbe estuary, and soon we’re away from Hamburg, picnicking by a field off the main road. Summer has started for good, and every village has a few huts selling freshly picked strawberries. Most of the field workers appear to have driven in from Poland, in large numbers.

After lunch we’re back on the motorway. Like this morning, there seems to be only two types of drivers. Lorries and old bangers in the slow lane, and demented baboons in the fast lane, driving exceedingly fast and with an uncomfortable tendency to drive up right behind you while you are overtaking one of the slow coaches.

The weather is still miserable when we arrive in Flensburg. The sky is grey like an autumn evening. At least it has stopped raining. We could almost use the fold-up wicker beach hut in the hotel reception. But instead we go out, urged on by Dr K who reminds us that we’re here to look at things.

A seaport set at the end of a firth within a stone’s throw of the Danish border, Flensburg started flourishing after it was granted a charter in the 13th century and from the 18th century it prospered on the rum and sugar trade. Danish for a nearly five centuries and badly affected by the Thirty Years’ War, the town reverted to Prussia in the 19th and the population voted to remain German after World War One. It’s also the place where Admiral Doenitz, shortly in power after Hitler’s suicide, signed Germany’s capitulation on 8 May 1945, bringing World War Two to an end.

We begin our stroll just outside the centre, to the Johanniskirche. We’re too late to visit the red-brick church, the oldest in Flensburg, but we walk around the neighbourhood, down charming cobbled streets lined with small painted houses. Children are playing in the pedestrianised square. In the churchyard, blue linen flowers are swaying in the wind.

The other churches on our itinerary – Nikolaikirche and Marienkirche, at either ends of the main drag – are also shut. We have to content ourselves with a walk up the main shopping street, Holm Strasse, which becomes Grosse Strasse, just up from where the seaside promenade begins. We pass the 1788 stock exchange, now a ballet school, majestic commercial and public buildings in red or brown brick, and, on the side streets, more painted half-timbered houses. A lot of signs and billboards are in Danish.

Down from the Marienkirche, through the Nordermarkt market square, we end up on the quayside. A few blocks up is Hansens Brauerei, a big traditional tavern in a handsome old inn. Just what we need. It’s a spacious interior with large tables and waiters carrying metres of beer. Dr K and Godfather P order schnitzels. I boldly order a grilled pork shank with sauerkraut and fried potatoes. There’s hardly a green vegetable in sight. We also order a bottle of red wine. The waiter comes back with a one-litre bottle of French Burgundy. That’s all they have in the way of red wine by the bottle. Or by the glass. But it’s ok, and, other than the ‘emergency’ duty free bottles we buy on the Stockholm-Helsinki crossing, it is the last cheap bottle of red wine that we will have on this trip.

For dessert we manage to share an apple strudel between the three of us. Behind us is a table of oldies having a rollicking time. They’ve guzzled beer and eaten vast amounts of pig, and still they have room for a portion of tiramisu each. Time for us weaklings to go back to the beach hut, via the waterfront, which at this time of day provides much-welcome coolness.

Buxtehude: war memorial on the Petrikirche, the church of St Peter 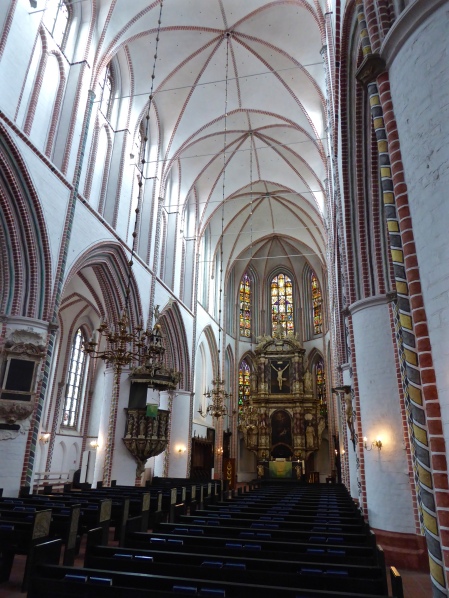 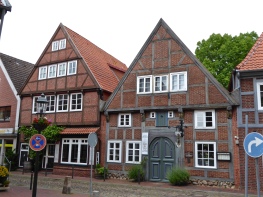 Flensburg: the Johanniskirche under leaden skies 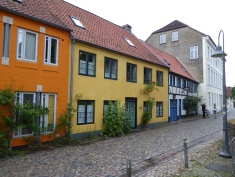 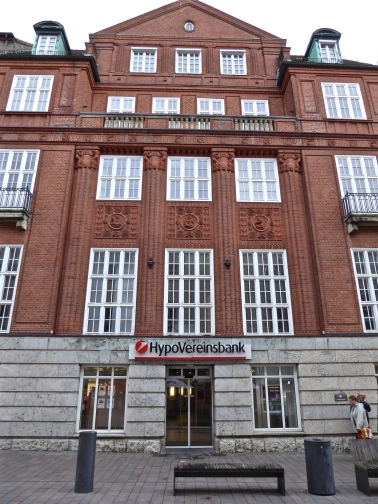 2 thoughts on “Flensburg: cobbled streets and pig-fest on the waterfront”