Dr K can be utterly shameless. And Godfather P is no better. No sooner have I bought our tickets for the permanent collection at Bern’s national museum that they’re off. Off to the special exhibition, that is, which is not covered by said tickets and which requires a green badge rather than the blue badges we were given.

By the time I put away my wallet and clip my lawful badge to my jacket, the boys have disappeared. I confidently feign to ignore the warden outside the special exhibition, who had momentarily disappeared but is now back on duty, and attempt to follow them into the restricted area. It’s not working. The warden points his moustache towards the entrance to the permanent collection on the other side of the room.

“We didn’t realise,” say the two offenders with an infuriating air of respectability when I ask them later, “that this was not part of the permanent collection.”

The Musée des Beaux Arts is a tiny place but it has some very nice pieces – Matisse’s Woman with a blue dress, a few Hans Arp amebae, some Derain, a couple of Rothkos, even. Swiss painters are also well represented, with landscapes by Hodler and Zund, and portraits by Anker.

My favourite, though, is a triple portrait by Edvard Munch of the children of lawyer Ludvig Meyer. It’s reminiscent of Sargent, but rougher, and a reminder that there’s a lot more to Munch than The Scream.

However, with both K and P enthusing about the special exhibition, I go green and buy an actual ticket. In passing, the women at the ticket desk – who are otherwise incredibly friendly – even congratulate the lads on slipping into the special exhibition with just their blue badges. Just the kind of encouragement they need.

Splashing out on that green badge is probably the best use of 7 Swiss Francs I’ve ever made. There are tons of Swiss painters, mostly 19th and 20th century, ranging from impressionism to realism, and covering landscapes, portraits and village life. Some are simply delightful, others are near-masterpieces, and all depict Switzerland beyond the chocolate box cliche we have come to expect. If you like this kind of thing, you will be in heaven. For me, it’s more than compensation for our disappointment in Lausanne at finding the musee cantonal’s own extensive collection of Swiss paintings put away in storage to make room for a special Tretyakov exhibition.

Bern itself is thoroughly charming. It’s not a big place but it’s busy enough and street life is buzzing in the late afternoon (even though a lot of the action seems to involve warming up for the France-Nigeria game which is about to kick off).

Several streets around the centre have arcades providing shelter in the winter and shade in the summer, and many of the shops have set up glass cabinets displaying their wares, from toy cars to dancing dolls advertising tango classes. It’s cute and charmingly old-fashioned.

It’s a warm and sunny day and people are sitting outside. Cafés have put out tables on the pavement and there is a barbecue being started on the town hall square.

The main market square is the nexus of the city, stretching south from the police station – a former asylum – to morph into Baerenplatz and then Bundesplatz, just outside the parliament building.

On the parliament’s terrace, people are reading or playing giant chess games. Nearby in the cathedral’s gardens, others are playing boules and table tennis. In the distance, you can see the Eiger, the Mönch and the Jungfrau, their peaks covered in snow still.

There are cars, but not many. Maybe it’s because people are already on holiday, or because it’s Monday and just a bit dead, as we found earlier in the day when we stopped for lunch in Fribourg.

Or maybe the Bernese are just not hooked on cars; bicycle signs outside the parliament building, pointing to various towns more than 50km away, suggest that they may be keen on the ‘two-wheels, no-engine’ approach. In fact, alternative modes of transport are quite visible: scooters and bikes (lots of them), but also the more unusual Twike, which apparently is a contraction of ‘twin bike’. Think about a tandem but with riders in a sitting-down position and side by side. It’s sweet and eccentric, and it seems quite popular.

On the streets, posters invite passers-by to be safe – though it’s not clear about what – or to take part in this summer’s musical events (scarily, with drawings of large mosquitoes).

As in Lausanne, the rubbish bins ‘talk’ – “I gobble everything”, says one, while another displays a fish skeleton to signify that it too should be used for general household rubbish.

You could inadvertently tread on an octopus in Bern, apparently

Go to a music festival, get bitten by mosquitoes 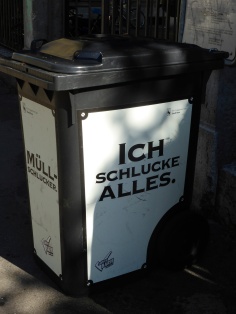 Hungry bin: ‘I gobble everything’

And the bear, the town’s animal, is everywhere. As an armoured soldier statue on the Market Street, on houses, on garden benches and even on biscuits.

Geneva, Lausanne and Fribourg somehow still had a bit of a French flavour. Bern is the first town that feels properly Swiss. We rather like it. It’s a pity we have to go, but Feldkirch beckons, via Luzern.

Bern: the police station, in an 18th century asylum

Bern: off the main square

Chess board behind the parliament 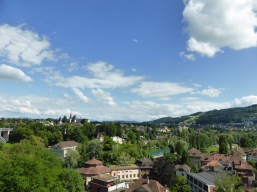 Looking out to the Eiger, Monch and Jungfrae

On your bike: Bernese are clearly fit cyclists 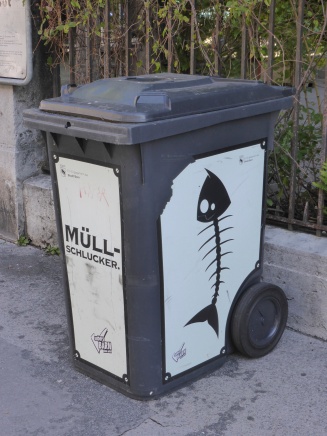 Underneath the arches: display cabinets advertise all sorts of items or services, including tango classes 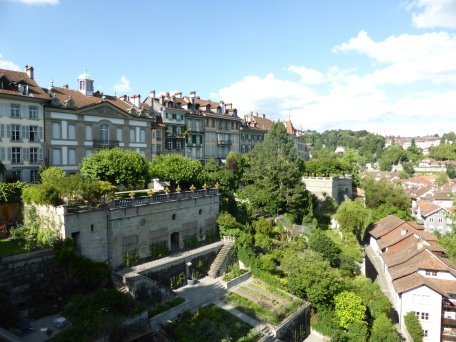 There’s only one bear 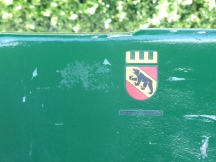 In the bear garden