With its lakeside location, picturesque old town and pretty canals, Annecy has undeniable charm, even on a muggy summer’s day – and that’s before we walk, by chance, into a delightful exhibition on ravens.

Annecy’s privileged location at the crossroads of a number of trade routes on the northwestern edge of the Alps has made it a wealthy place.

Its desirable real estate reputedly makes it the most expensive town in France and there is an air of affluence on the streets, even if, like many larger French towns, Annecy has been experiencing unrest in its out-of-town inner cities.

We reach the former capital of the counts of Geneva a bit later than planned, having left Cluny after a stylish breakfast at Maison Tupinier a little later than scheduled.

We also stopped, just before lunch, at the small but magnificent Chapelle des Moines in Berzé-la-Ville.

The church, in the Maconnais hills, is about 15 minutes outside Cluny, and Dr K insists we should make the small detour to check out its 12th century frescoes. It sounds like another anorak request to stare at a few square inches of peeling paint but we oblige to keep the boy happy.

Having sweetened the dour lady warden into letting us in just as she is closing up for lunch, we find ourselves looking at stunning frescoes in Byzantine style reminiscent of Ravenna’s mosaics. We get a few postcards – photos are not allowed and Madame Dragon is keeping a close eye on us – she smiles; we’re off.

So it’s mid-afternoon by the time we get to Annecy, check into our hotel in Argonnay and head into town. By now the streets are heaving with Saturday shoppers and ice-cream wielding tourists. There’s also a flea market along the canals in the old town, which adds to the sense of busy-ness.

PEACE IN THE CASTLE

Winding our way across bridges, through the crowds and up cobbled streets, we head for the castle, just above the old town. It’s a pleasant enough building in Savoyard style: square, chunky and a little forbidding, but it has a commanding view of the city below, over to the lake and with the mountains and mount Semnoz in the distance. And it’s peaceful.

If you’ve seen French medieval castles before you are unlikely to be surprised by Annecy’s. It has some good features, such as coffered ceilings and windows with stone seats, but there is no original furniture left. Still, as a local place for local people or visitors interested in local life, it’s a great regional museum.

One wing houses a small collection of Romantic Alpine paintings – it even has a Fragonard. And if you’re interested in life in Savoie in the old days, then you will like the collection of old furniture – cupboards, beds, trunks, etc. None of this is likely to make you go ‘wow’ but it’s nicely evocative.

Best for me, though, was the temporary exhibition, including a set of installations on ravens by local artist Violaine Laveaux, entitled ‘The Constellation of the Crow’, based on the Grimm brothers’ tales. It was charming and playful, and it was a delightful reminder that regional capitals are culturally active and can offer something distinctive with local flavour.

The same goes for the Palais de l’Ile, the old prison on a tiny islet on the river Thiou. It’s no different from most medieval prisons: narrow corridors and small rooms that must have been terribly dank, but it’s been nicely done up and it has an exhibition on architecture in Annecy in the 20th century. Two floors of it, charting how the town has developed since the 1970s to deal with population growth and new challenges such as sustainability.

When we are eventually done with kultcha and come out in the streets again, the air is thick and sultry. The light is flat and there is storm in the air. We are drawn to the lake in the hope we can catch a bit of fresh breeze. The promenade is busy still, but not rammed in the way it is in peak summer season. It would be nice to go on a boat, or walk along the shore away from town towards the grand lakeside villas, but really what we need is a drink, so we head back and sit down at one of thousands of cafes that line the canals.

Having lived in France since the 1950s Godfather P has converted to a number of essential French ways. He and I order a ‘diabolo menthe’, mint cordial with lemonade, which, being an unreconstructed Brit, Dr K invariably dismisses as mouthwash. He has iced tea instead – which, really, is like cold dishwater.

A bit drained by the heat and reaching saturation point, we decide to get on a bus a bit earlier than we had planned. Just as well. As we arrive at the hotel in Argonnay, about 5 km from town in the foothills of the mountains, the rain starts. Gently at first, in an atmosphere so muggy that we keep our windows open, just a little, so we don’t stiffle. By the time we turn ourselves around for dinner, the heavens have opened.

It’s still raining when we get back to our room in the eaves. And all night the rain falls, heavily on the roof above our heads. Still, it’s not as loud as the birthday party which is going on in a garden two doors down the street, complete with live band under a couple of marquees. Despite the weather it will not finish until 3 in the morning. Happy birthday, whoever you were, but next time please can you stop by midnight so we can get some sleep.

By morning, the sky is clear and the air is light. After a simple breakfast at the hotel – shared with what looked like some of the nights revellers – we are ready to head northeast to our next stop: Lausanne. 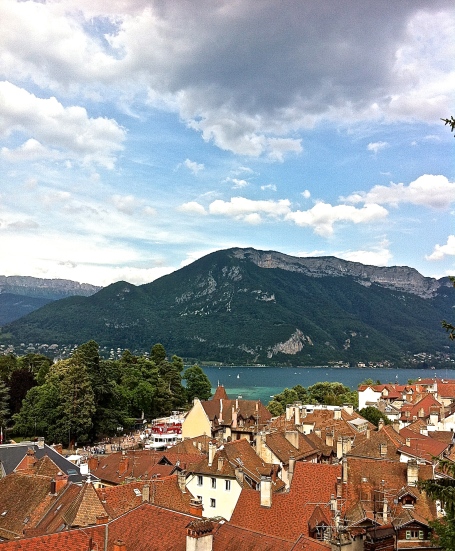 View over Lake Annecy from the castle courtyard 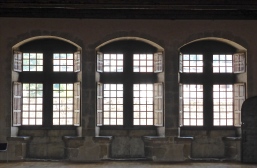 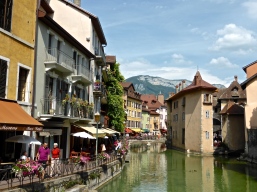 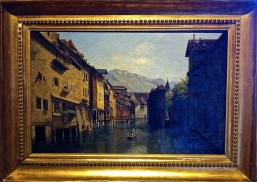 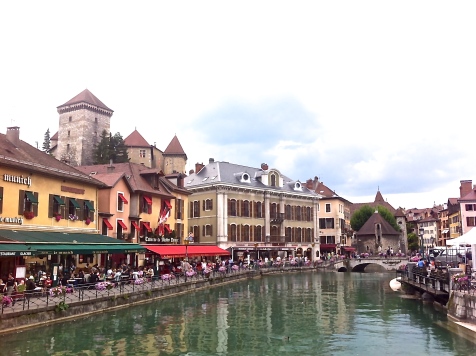 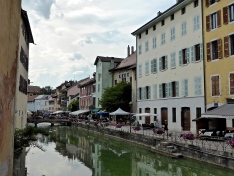 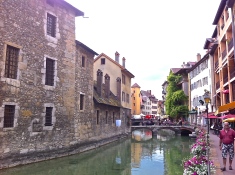 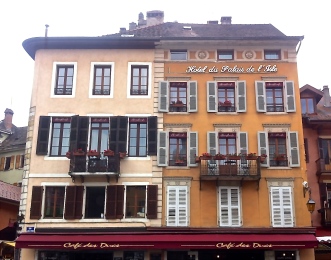 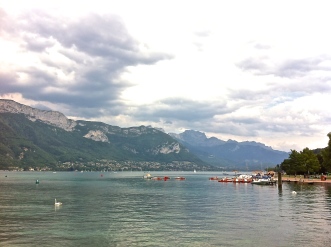 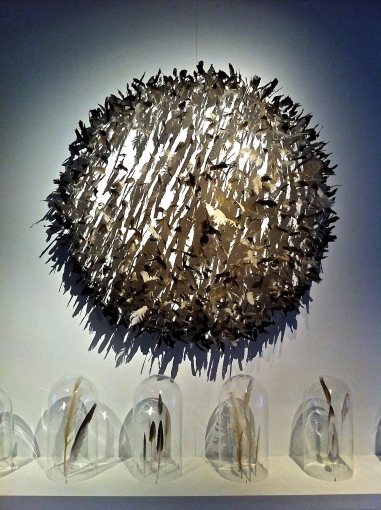 Part of an exhibition on ravens by Violaine Laveaux 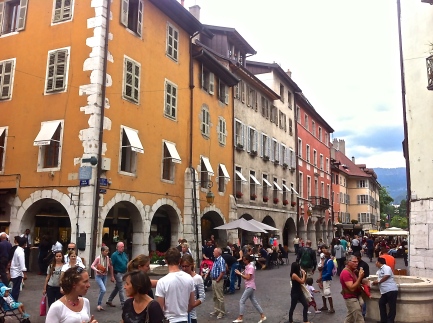 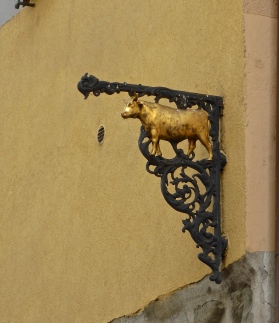 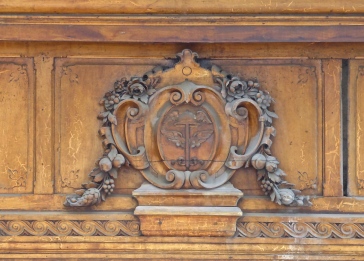 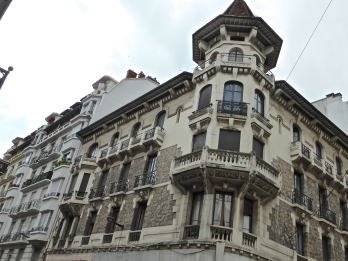 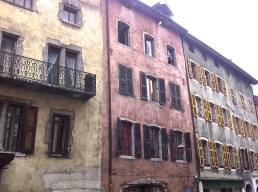 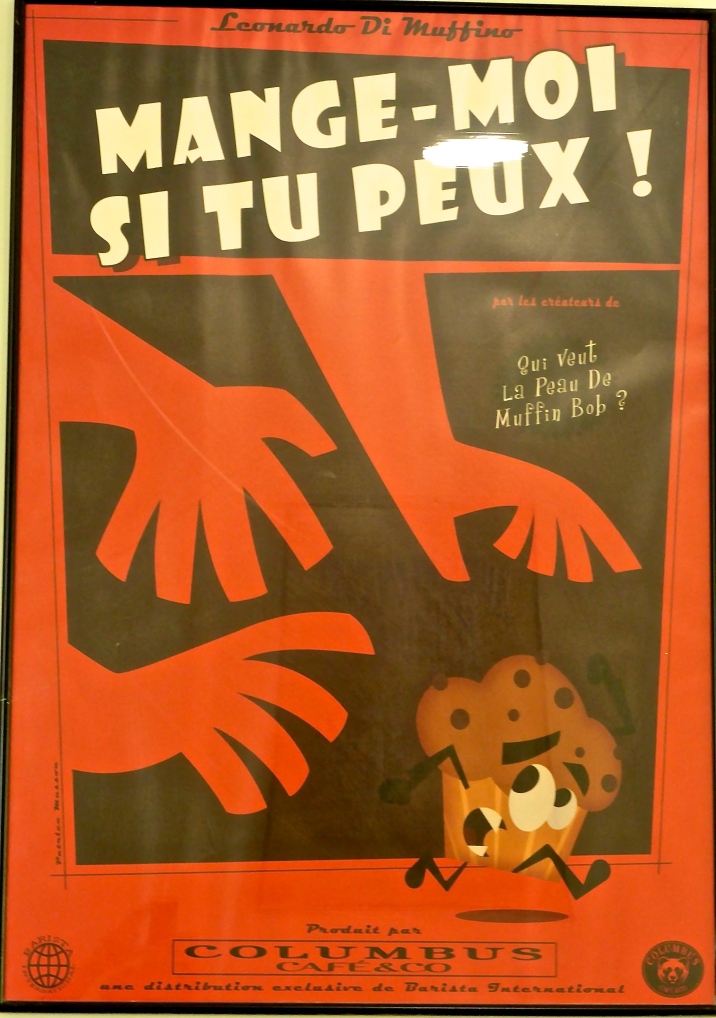 On way to Annecy; Catch me if you can spoof

2 thoughts on “Ravens and diabolos in Annecy”